In this game, you can forget the instructions of adults to be careful and accurate.

Are you angry and want to drive your anger away? Then choose your weapons of destruction and kick this half-dead toy. This game will show you how to beat, shoot, set fire and even drop an atomic bomb on a poor doll. There will be a whole bunch of weapons to choose from, but it will not be available all at once, you have to kill your doll many times to get gold, and for this gold you can buy yourself new cool guns! All game elements can be broken and destroyed, and all this happens in well-executed 3D graphics. The app is a great way to remove the negativity received throughout the day. However, remember, this game is not serious and does not support violence in general. The developers claim that this application was created just so that in real life no one would beat anyone, and everyone would live peacefully! And in this game you can destroy, bomb, blow up, shoot and create a complete and total chaos.

Kick the Buddy APK, a game to kill stress

Kick the Buddy is one of those games that is difficult to classify, but that nonetheless has something special. And it is such an original title that it cannot be framed within any genre. It is certainly a different game. However, what does seem clear is that it is the ideal title to clear your mind and let off steam after a bad day at work. At the end of the day, in Kick the Buddy, the only goal is to give a rag doll kinky and do it in the most creative way possible. You want to know more? Keep reading and we will tell you all the secrets of one of the most popular and original games of recent years.

Buddy is the typical rag doll of all life. The one with whom every child dreams and who smiles carefree at all hours. Something like the best friend of our childhood. And like a good friend that he is, he is always there for you. And it is to such an extent that it allows itself to be mistreated to free you from the stresses of a bad day. Whether you shoot him with an automatic weapon, pierce his limbs with a chainsaw, or smash a chocolate cake in his face, Buddy will still be there for you, ready to keep getting the best of it. Whatever you do to him, he never fails you.

Of course, although at first he will appear smiling, as he receives more and more blows, his appearance will suffer. Bruises, bandages, band-aids will appear and your expression will turn sorrowful. Fortunately, it always ends up happening to him and after a while he returns to present himself with the same cheerful expression as always ready to play with you again.

What can you expect from Kick the Buddy?

To begin with, you can expect a game with a very simple dynamic, but at the same time, very fun. What you are going to have to do is hit and hit the rag doll over and over again. Don’t worry, he doesn’t complain!

To do this, at first you will only have your hands and the most basic weapons. However, as you play, you will be able to increase your arsenal of weapons and objects with which to beat Buddy. Of course, don’t get your hopes up, you’re going to have to work hard to get new ways to torture the doll. Of course, the more fun and original the item or weapon is, the more difficult it is to unlock. Something similar happens with the different decorations available for the game room, to call it somehow. Keep in mind that Kick the Buddy takes place inside a kind of cardboard box. To all of the above, we must add the different costumes that can be put on little Buddy.

What weapons and items can you use in Kick the Buddy?

One of the attractions of the game is the wide variety of objects and weapons available. In the complete inventory of the game you will find from grenades, flamethrowers and knives, to toasters and cakes. In addition, it is also possible to attack Buddy with different animals, such as lions or wasp swarms. There are even mythological beings available. And you will even be able to use an electric chair or carnivorous plants. So that you always find what you are looking for, all weapons and items are arranged by categories. Although, if you prefer, you can always hit it with your fists or stretch it with your bare hands. In any case, the fun of the game lies in making the rag doll kinky in the most fun and original way possible.

Kick the Buddy is a free game, but with in-app purchases and a lot of advertising

You can download Kick the Buddy for free, although unfortunately this will only give you access to the most basic options. And the thing is that in order to unlock the best weapons, you are going to have to play a lot, go through the checkout or swallow many advertisements. That or pay a subscription (weekly or monthly) to the premium version.

A game not suitable for minors and sensitive people

Initially, the game itself does not show signs of violence such as blood or wounds (although they can be added). However, given its theme, it is not a game for minors. Above all, it is not recommended for the little ones, who still do not distinguish well between reality and fiction. It is also not the best option for the most sensitive people.

Kick the Buddy has a point between gore and cruel at the same time as innocent, which makes it a really strange and original game. It is one of those games that catch you and allow you to disconnect from the stress and worries of day to day. If it stands out for something, it is for its originality and simplicity, two fundamental ingredients in games for mobile devices. It is, in short, a fairly casual game, to have a laugh and pass the time, but without major aspirations.

However, unfortunately, it is also a game with a somewhat aggressive micro-payment system that includes a lot, a lot of advertising. Thus, to be able to take full advantage of the Happy Racing Chill Fleet proposal, it is necessary to go to the checkout, see a good string of advertisements or do a little of both.

Get gold and infinite money to unlock more weapons and items to torture Buddy with. Unleash your creativity without having to invest real money in the game. In addition, this way you will also be able to access the different decorations available for the torture room. Download Kick the Buddy APK mod for free from our website, unlock the game and say goodbye to stress.

We are ready to make your game experience even greater! Bugs are fixed and game performance is optimized. Enjoy!

Our team reads all reviews and always tries to make the game better. Please leave us some feedback if you love what we do and feel free to suggest any improvements. 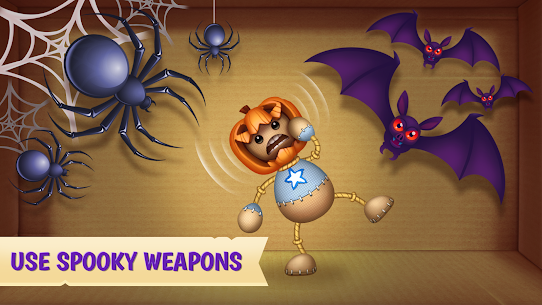